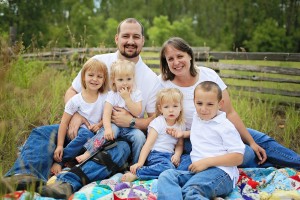 Aron Schrepfer accepted the call to be the pastor at Pioneer Peak in October 2013.  The Lord has led Pastor Schrepfer through many experiences which have added to his toolbox for ministry at Pioneer Peak Baptist Church.

Pastor Schrepfer grew up here in Alaska’s Mat-Su Valley attending Birch Harbor Baptist Church in Wasilla. In his freshmen year of high school Aron’s parents left Alaska to move back to Montana as they followed God’s leading into full time ministry. So while in high school, Aron was traveling with his parents as they were on deputation and his love for missions and missionaries grew from that perspective.

After graduating in 1998 he moved to Iowa to attend Faith Baptist Bible College. Before his first semester at Faith Aron met his future wife, Rebekah. Although neither of them realized that they would one day be married they did have a good friendship during their years at Faith. Six years after they met Aron and Rebekah were married in September 2004. They enjoy one another’s company as best friends.  Rebekah enjoys homemaking, ministry with the ladies at PPBC, quilting, and blogging at MostlySensible.com. Aron and Rebekah have four blessings; Matthew (’07), Katie (’08), Nataly (’10), and Sara (’11).

While in Iowa Aron filled pulpit often. He also was the interim pastor of a small church in southern Iowa. Then in 2007, they moved to Kansas City where he was an Associate Pastor for 7 years.

Pastor Schrepfer loves being back in Alaska. He had prayed that the Lord would someday allow him to minister in Alaska, and the Lord blessed by allowing him to be a pastor only 15 miles from the home where he grew up. In fact, Aron remembers even helping Pioneer Peak Baptist Church build their sign with his dad years ago along the Old Glenn Highway which is still in use today.

Pastor Schrepfer loves Pioneer Peak Baptist Church and is looking forward seeing how this church will grow over the years to come.

A word from Pastor Schrepfer: 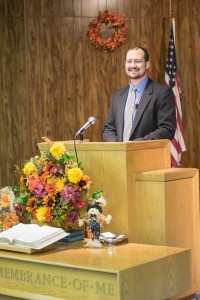 But by the grace of God I am what I am: and his grace which was bestowed upon me was not in vain; but I laboured more abundantly than they all: yet not I, but the grace of God which was with me …Therefore, my beloved brethren, be ye stedfast, unmoveable, always abounding in the work of the Lord, forasmuch as ye know that your labour is not in vain in the Lord.

The doctrines taught throughout this chapter are constant reminders to us.  The few verses before verse 58 speak of Christ’s return. The word, “Therefore” ties in those doctrines.  “Be steadfast” means to be settled or grounded in our faith. “Unmoveable” means we should be standing firm in the doctrines taught in Scripture. “The work of the Lord” reminds us to be continually pouring out our lives. “Abounding” is like a cup being filled and filled until it is overflowing over the rim of the cup. Then we have this promise that our “labor in the Lord is not in vain,” in verse 10. The apostle Paul adds this as a reminder to himself that as he strives to labor for the Lord it isn’t by his strength but by God’s grace he is able to carry out God’s ministry.

* Fellowship Sundays are on the 2nd Sundays of each month. We have a fellowship meal and a short afternoon service with no evening service.

Update Personal Details
Your ticket for